Much needed questions to the DEVS. I think people want some answers from the main men...

These are questions that I believe not only myself would like some answers to, but possibly a few of the community, who I know have been around a while.

There has been much negativity as well as a drop in price over the last few weeks. The dev team has remained silent on all of this.

Can we have a new roadmap? Which is realistic to achieve. I have no issues if it says things are going to take a lot longer than people thought, its not an issue, but what is an issue to me is having no idea whats being done.

What is the latest on Reddcoin LTD. I thought there was a lot of investment coming our way, is this happening? Will it happen?

Lastly from me… can we have some regular updates (monthly on a set date for example)? So that people know what is going on. I cannot see any possible reason why, if the dev team is 100% commited still, that they cannot write 10mins worth of an update. It keeps everybody excited knowing its still all happening.

I must also add, I have loved reddcoin from the day I found it, I am a multi millionaire holder, and provided we get a little bit of feedback, I have no intentions of giving up. I just want to have the excitement I have had for so long back, and not be concerned this project has hit a brick wall.

I hope the rest of the community are on my side with this, and if people would like to ask more questions publicly, please do so! 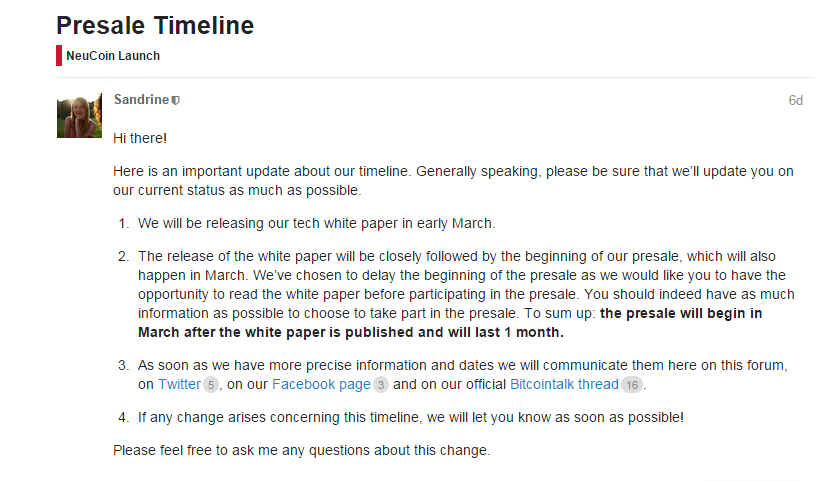 Can we have a new roadmap? Which is realistic to achieve. I have no issues if it says things are going to take a lot longer than people thought, its not an issue, but what is an issue to me is having no idea whats being done.

I don’t see that as a threat but only yet another cryptocoin. Interesting and promising perhaps, but not a direct competitor unless I missed something.

Reddcoin price goes down due to Neucoin backed up by angel investors ??? Weird ???

m3ndi3 I think you mentioned that you rushed into Reddcoin maybe too fast. I think your analysis is premature as well. Don´t make the same mistake again…

m3ndi3 I saw your post on Reddit and was quite surprised. Investing takes a bit of maturity and some patience. Demanding an update or a new Road Map…when one has been provided albeit without a time line and target dates. Sorry to see you go but I am sure you are making the best decision for you at this time. I came here with a 1500 day plan…nothing I have seen has made me consider changing course.

m3ndi3 Maybe I’m missing something, but couldn’t Neucoin accomplish pretty much the same thing just using Bitcoin? Everything I’ve read so far sounds like another centralized token solution, why not just use Changetip? Changetip has a lot more VC backing and first mover advantage too.

I dunno… The fact that they want people to invest in a yet another totally new coin with a massive rate of inflation… I guess I’m skeptical.

Either way I thought RDD the game was cool, and best of luck going forward!

I think the devs are in a difficult position here. As laudney says, even though development is taking place there’s not always something new to announce or release. Different pieces of the Reddcoin project are being handled by different devs, which is of course necessary, but I’m sure that makes it harder to predict what order the releases will follow.

That being said, there’s been a clear call from the community for more updates. Maybe a breakdown of what each dev is working on and a list of planned projects would be an acceptable compromise?

A who does what is not helping in my hold opinion.

artiscience a road map with out reliable mile markers is sort of empty and useless though and that is what updates are, the mile markers letting people know how close things are to being ready or what is in the near and not so distance future.

just saying this is what we plan to do and then leaving it at that is not that great of a thing to do in a community full of concerned people about current events and that is what a road map basically does. which is why occasional updates mile markers at least every other month is needed to keep people on the right course and road to alleviate fears of being lost in the wilds.

Even if that update just says 3 months out still for project xyz to be completed or ready for testing. that at least gives a direction and time frame for people to use to gauge how much value the coin has to them at this point and maybe further down that road.

should not be hard for all the devs to come together to provide such a thing at least every other month if not more often. for if it is that hard to do it creates lots of concern and worry about the true direction and future of the coin for many that have adopted it based upon what was first told them.

More transparency would definitely be nice. We have invested a lot of time and money into Reddcoin and to see that a lot of the community is acting nervous and seeking answers, then they need to be delivered. If there’s a roadblock with development then we would be more than happy to know and help out. There are lots of developers in the community and with cryptocurrency being a community-driven system then I don’t see the issue. I love Reddcoin and what it stands for, but there definitely needs to be some changes. We changed our whole platform from Blackcoin to Reddcoin because of the great potential. Let’s get that back.

It must be a great pressure to be a coin developer. Either way, yes I think transparency is paramount. Just keep us in the loop and don’t be afraid of delivering bad news. We will go through good and bad times together

Sebsebzen Exactly, I hope the devs aren’t getting burned out from the constant nagging from the community. If it’s bad news or just not a lot of progress because everyone is busy, I’d rather hear that than silence. And, of course, to their credit… They pretty much said exactly that. We have a good core group of followers.

I’d love to hear something about the browser wallet soon. Heck, I wouldn’t mind seeing more of laudney 's photography just to hear from him and that he’s in good spirits, lol.

Exactly, I hope the devs aren’t getting burned out from the constant nagging from the community.

Sorry to say this but this is the misrepresentation I am complaining about. True, some people are complaining and pressing like “if this isn’t done till the end of the week I’m out”, but they aren’t active part of the community mostly. On the other hand I and several others are just requesting a real roadmap. It really bugs me out that this is reduced to “nagging” …

That answers nothing to me. I already looked at that prior. I see no plot twist.

Drakona You are describing what I referred to as road map with milestones.

artiscience perhaps I misunderstood your version of roadmap then. If so my fault and I acknowledge this. Just I have seen many coins put out a roadmap with no mile markers and then watch the coin die or become a simple mine+dump coin. Not something I would like to see with this coin.